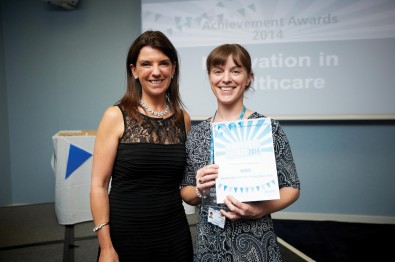 The driving force behind a choir for adults with neurological conditions has been nominated for a Yorkshire Women of Achievement award.

Wendy Neill formed the Giving Voice Choir in June 2014 – initially as a six-month pilot – after seeing growing evidence through her work as a Speech and Language Therapist with Leeds Community Healthcare NHS Trust that singing promoted health and wellbeing.

Since then the choir has gone from strength to strength, performing publicly at a range of events across Leeds - developing its members’ confidence in the process.

Now Wendy, who runs the choir on a voluntary basis on top of her day job, has been recognised with a nomination in the Community Category at next month’s Sue Ryder Yorkshire Women of Achievement Awards 2018.

She said: “It’s nice to get the work I’m doing recognised and if we can get some new members on the back of it or inspire people to come along then that’s brilliant.”

The Giving Voice Choir meets every Wednesday between 6.30pm and 8pm at the Holy Trinity Church on Boar Lane.

Members, who don’t require musical experience or ability to join, choose their own songs and recent favourites have included A Crazy Little Thing Called Love, I’m Still Standing and These Boots are Made for Walking.

And Wendy is in no doubt about the benefits for those taking part.

“We have got a core group of about 20 members that come on a regular basis and people have used the choir as a means of therapy as part of their rehabilitation,” she said. 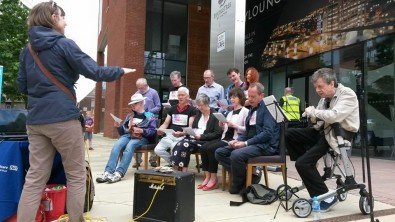 Pictured above: The Giving Voice Choir performing at the Leeds Waterfront Festival in 2016

“It improves communication, the voice, confidence, breathing and the psychological side of being in a group is hugely positive.

“We have had members who have said it has given them the confidence to go out and join other groups.

“It just reduces that loneliness because there are people who before wouldn’t necessarily go out or go into town and things like that.”

The Giving Voice Choir is for all adults with neurological conditions and their carers. To express an interest in joining or to find out more, email givingvoice@outlook.com or visit the choir’s Facebook page.