You are here: Home > News > Thanks a Bunch Ian and Faizan!

Thanks a Bunch Ian and Faizan! 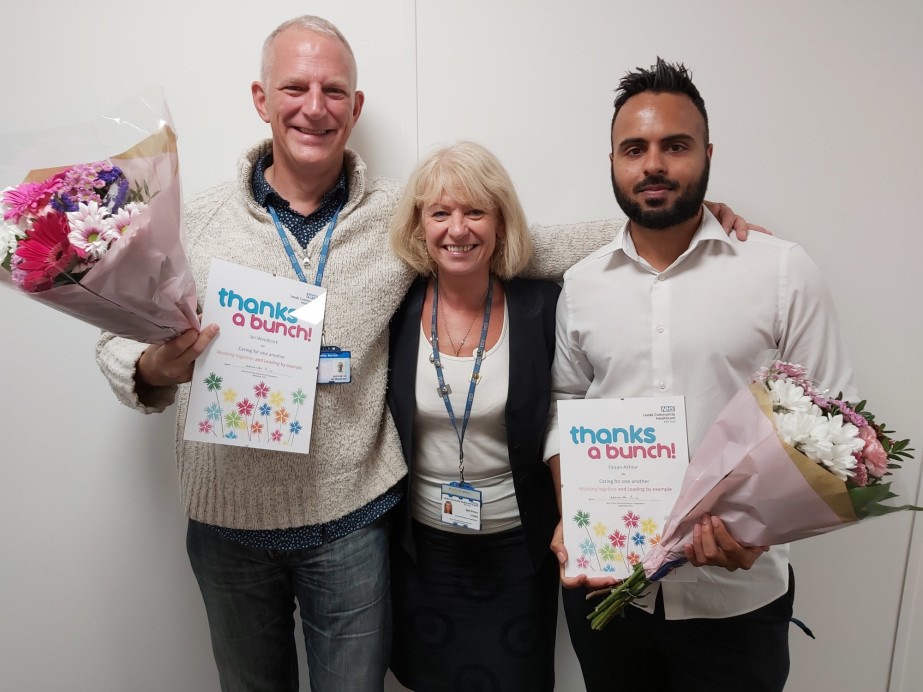 This month’s ‘Thanks a Bunch’ was awarded to Ian Woodcock and Faizan Akhtar from the Electronic Patient Records (EPR) Team who cared for a cleaner at Stockdale House who had collapsed.

Ian and Faizan were working late. Ian went into the kitchen and found the cleaner on the floor in pain.  Between them, Ian and Faizan kept the cleaner calm, called for an ambulance and located a family member who was cleaning on the fourth floor. They both waited with them for the ambulance. Sadly the cleaner who had collapsed didn’t survive.

Sam Prince, Executive Director of Operations, nominated Ian and Faizan for the Thank a Bunch award and presented them with their flowers and certificate. She said “I wanted to thank you for what you did. It has been noticed by us all so thank you very much. I am delighted that your rapid action and calm professional manner could be recognised by the Trust”.

Ian and Faizan were very surprised. Speaking for both of them, Ian said: “We only did what anyone would have done in the circumstances.  We appreciate the kind support we have received from everyone at LCH.”

Ian and Faizan were acknowledged for the Trust behaviours of: Caring for one another, Working together and Leading by example.