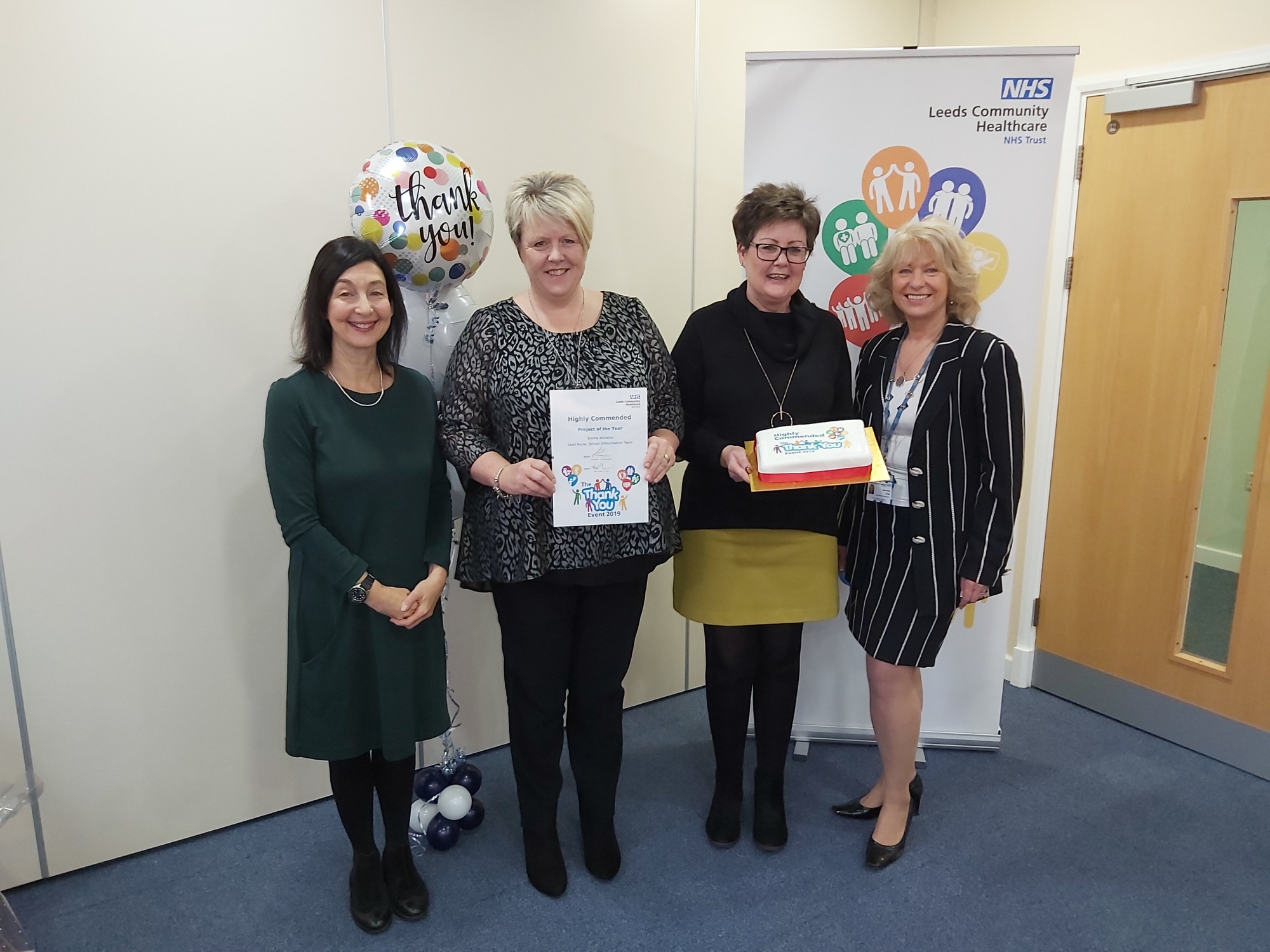 The grit, determination and forward-thinking needed to scope, argue the case for and implement a new digital system to replace the 80,000 paper forms generated by annual school immunisations in the 46 high schools across Leeds and the annual flu jab campaign, has won Emma Williams and Michelle Kite Highly Commended for Project of the Year.

Following exhaustive research – often in their own time - Emma, Lead Nurse School Immunisation, and Michelle, an Administration Supervisor, found a suitable e-consent process and thought about how it could work at Leeds Community Health. They weren’t daunted by the fact they’d never written a business case and successfully argued for the cash to buy in the system. Even though it wasn’t a smooth process, the duo solved many issues along the way which allowed the system to go live in September.

“They worked meticulously to think through solutions to any problems that cropped up and they have a ‘can do’ attitude to problem solving,” said 0-19 Service Manager Paula Groves when she made the nomination. She added that they have saved significant amounts of time for the School Immunisation Service’s administrators and nurses.

“With their forward thinking, proactive attitude Emma, Michelle and the team have thought through solutions, tried them, re thought them, tried them again – a fabulous example of the PDSA process in action to find  solution and manage a huge change successfully.” Paula added.

Executive Director of Operations, Sam Prince, popped into their base at Woodhouse Health Centre to handover the Highly Commended certificate, hamper and cake. Unfortunately, Michelle wasn’t able to be there for the presentation but her colleague from the Lynn Brown from the Admin Team accepted the award on her behalf.

After being presented with the award, Emma said “I’m speechless! Thanks to Paula for nominating us and thanks to Michelle who unfortunately couldn’t be here but it really is a team effort. I’m absolutely gobsmacked!” 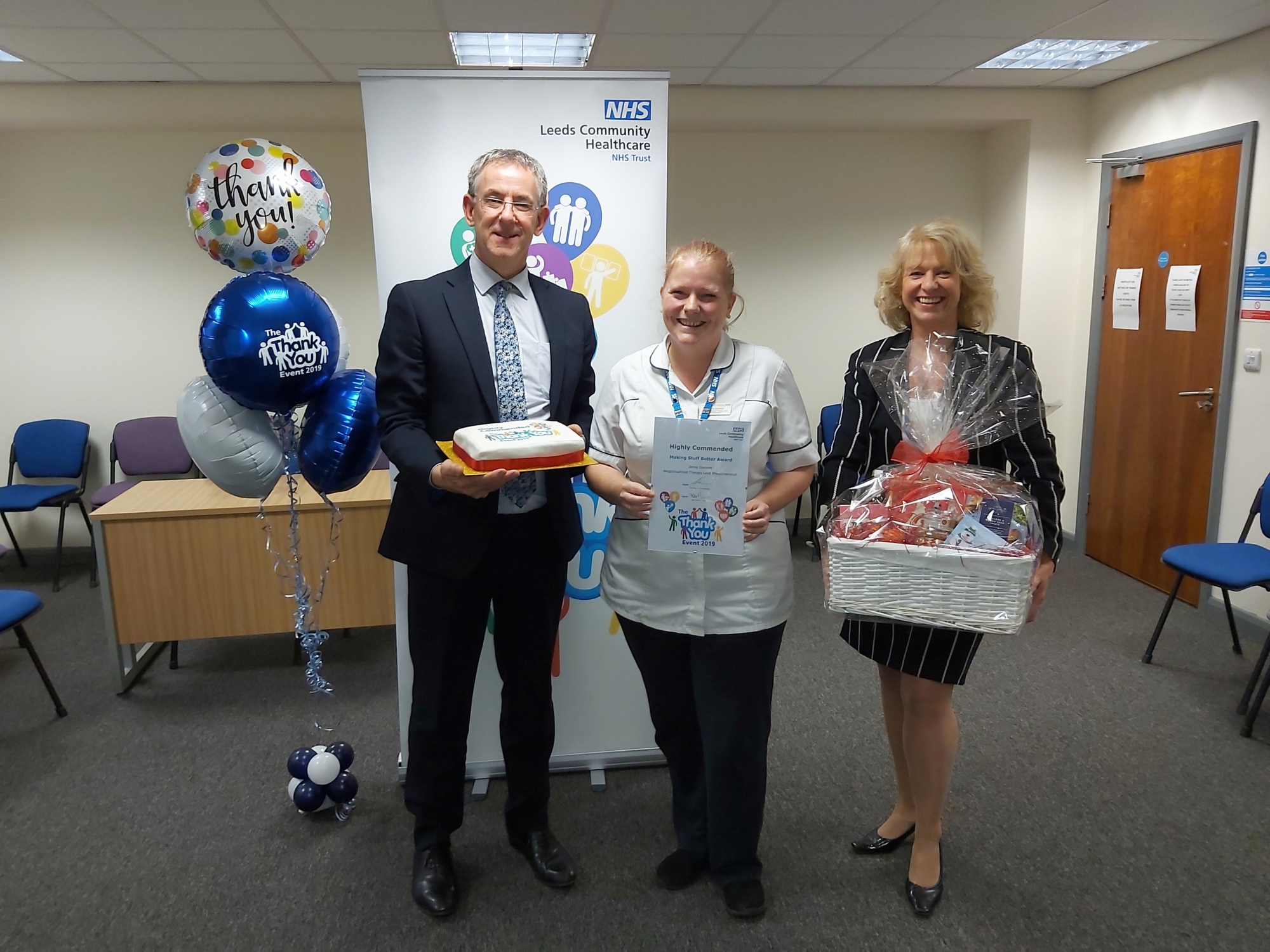 The Garforth physiotherapy drop in and Elderly MOT services are two examples of making stuff better which result from Jenny’s brilliant  ‘outside the box’ thinking. Both services aim to tackle frailty and prevent falls in older people.

The highly motivated and hard-working Neighbourhood Therapy Lead Physiotherapist spoke to colleagues and relevant GPs and reviewed clinical data on SystmOne to gather information about what the Garforth population might need and to see if doing something differently would benefit this group of vulnerable patients.

Kirsty Jones, Clinical Pathway Lead, said: “Jenny’s research highlighted an opportunity to work with patients before they reached the point of needing neighbourhood team services and the physio drop-in and elderly MOT ideas were born. She needed a venue so engaged colleagues at Garforth Net to get use of their community centre.”

Jenny runs the Garforth physio drop in every week in conjunction with Leg Club and Talking Point on Thursday morning. No referral is needed and the services are advertised in Garforth NET newsletters and with GPs so that anyone can drop in.

She wasn’t expecting Sam Prince, Executive Director of Operations, or Bryan Machin, Executive Director of Finance to drop into her Kippax base with a Thank You hamper! After receiving the award she said: "It's not just me, it's all the therapists I work with. I had the idea but everyone has helped to make it happen. Thanks too to Kirsty, without your support this wouldn't have got off the ground!"