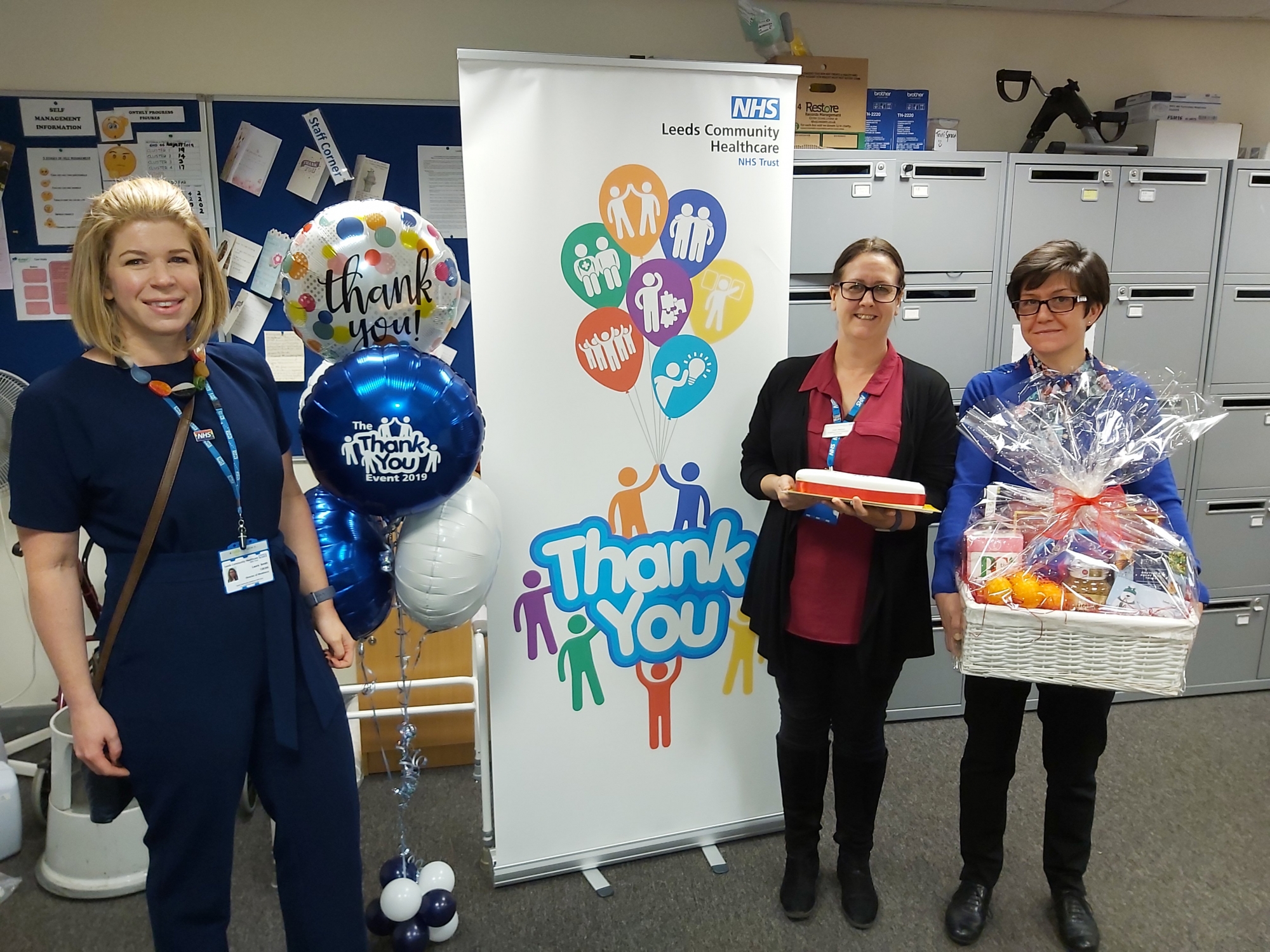 Joan Nelson, Neighbourhood Palliative Care Lead for the Middleton and Kippax areas, is described as an ‘exceptional nurse’ who shows a great deal of care and compassion for patients and their families at the end of life. She is known for regularly going above and beyond to make sure patients have the care package and medications they need and for being willing to have those ‘difficult’ conversations with patients and families about end of life care.

Joan is described as ‘sensitive and empathetic throughout’ by Vicky Lamb, Neighbourhood Clinical Quality Lead, who nominated her for the Kate Granger Patient Care Award. “She puts the patient at the heart of her role, she treats patients and their relatives with respect, dignity and kindness at often the most difficult times of their lives,” said Vicky.

As an example, Joan recently arranged for a dying patient to have a bath at a local day hospice so they could fulfil their wish of getting in a bath again – something they couldn’t do at home. This kind of compassion means Joan often gets positive feedback from patients and their families and she has recently been thanked in a patient’s newspaper obituary.

Joan shows the same kind of thoughtful care to her colleagues too by supporting them with their learning and development, offering training and doing whatever she can to make sure they are able and confident to deliver the highest quality palliative care. She also supports colleagues with debriefs and clinical supervision after difficult, complex or emotional patient visits.

Speaking after her surprise ‘Thank You’ Award hamper was presented by Laura Smith, Director of Workforce and Ruth Burnett, Executive Medical Director, Joan said: "I am proud to serve the community I live in. Midwives have the privilege of welcoming people into the world and I have the privilege of caring for my community as they leave it." 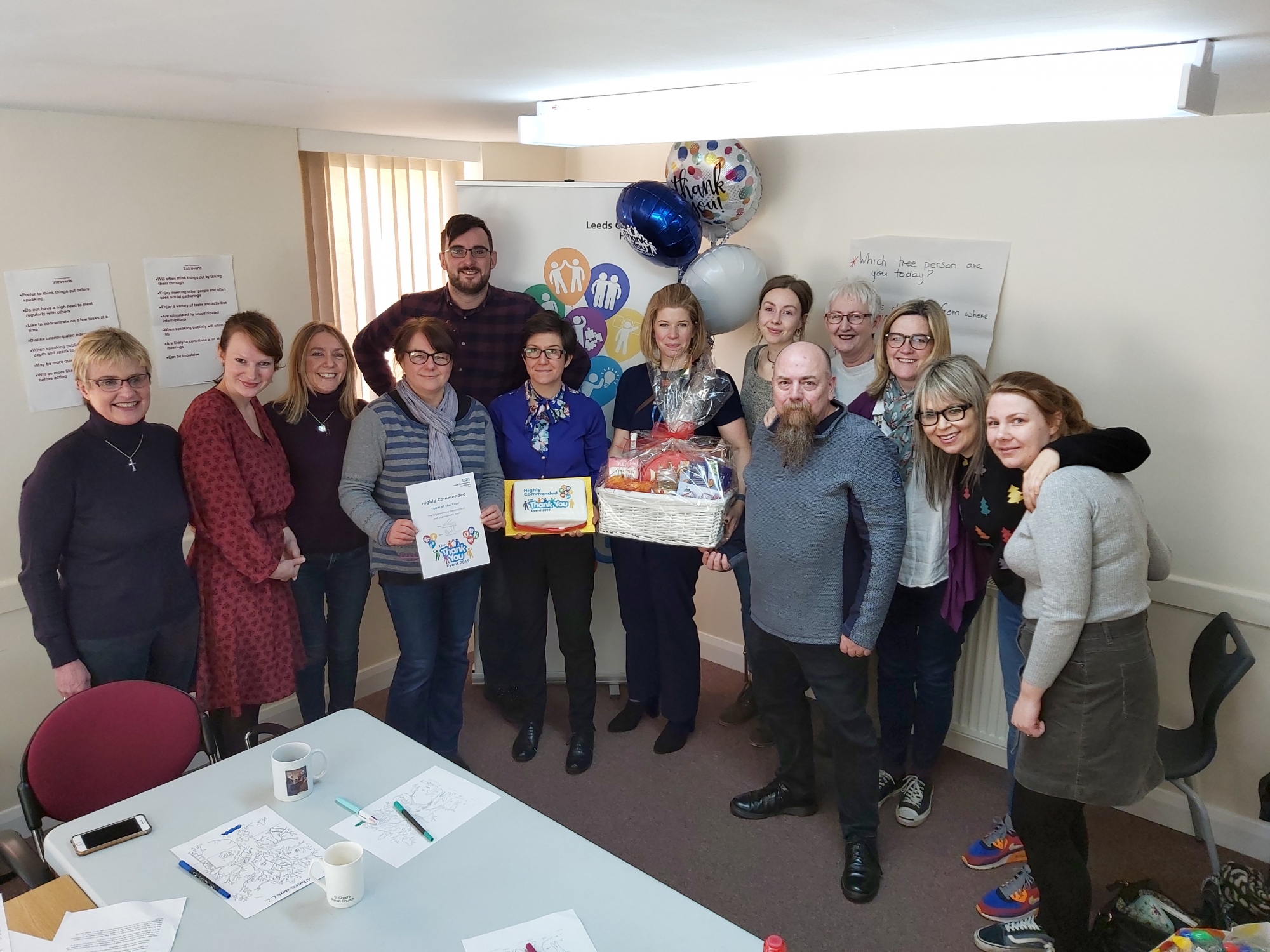 Proud Head of OD and Improvement, Anne McGee, has nominated her entire Organisational Development and Improvement Team for a Thank You award to celebrate their achievements over the year and their collective commitment to deliver the best possible care to all our communities and to make LCH the best place to work.

She describes them as incredibly committed, talented, passionate and hardworking and said they live the values and behaviours of our organisation every day, showing kindness to each other and to colleagues right across the organisation and beyond.

Over the year, the team has:
Designed and delivered the Leading by Example offer which 163 leaders have participated in, giving excellent feedback. There is also recognition from the Leeds System for the System Leadership module.
Developed and progressed our QI “Making Stuff Better” strategy with a focus on engaging people in improvement work, training in QI, and sharing and learning.
Worked closely with ICAN colleagues and the Major Change Team at Rapid Improvement events to engage staff in the ICAN Transformation.
Developed our approach to Talent Management and supporting the mobilisation of the Talent Pool for Project Managers.
Supported numerous frontline teams through improvement, redesign and mobilisation with kindness and sensitivity.

Anne said: “The work achievements speak for themselves, and are completely enabled by the team spirit and support for one another. At a recent away day, as a team we agreed that what we were most proud of was the trust we had between us to support each other to be the best we can be. What a team; I am honoured to be part of it.”

After the team were presented with the award Anne said: "I feel immensely proud that the organisation has recognised the collective contribution of this team. They're a phenomenal group of people."

Leader of the Year Award - Winner 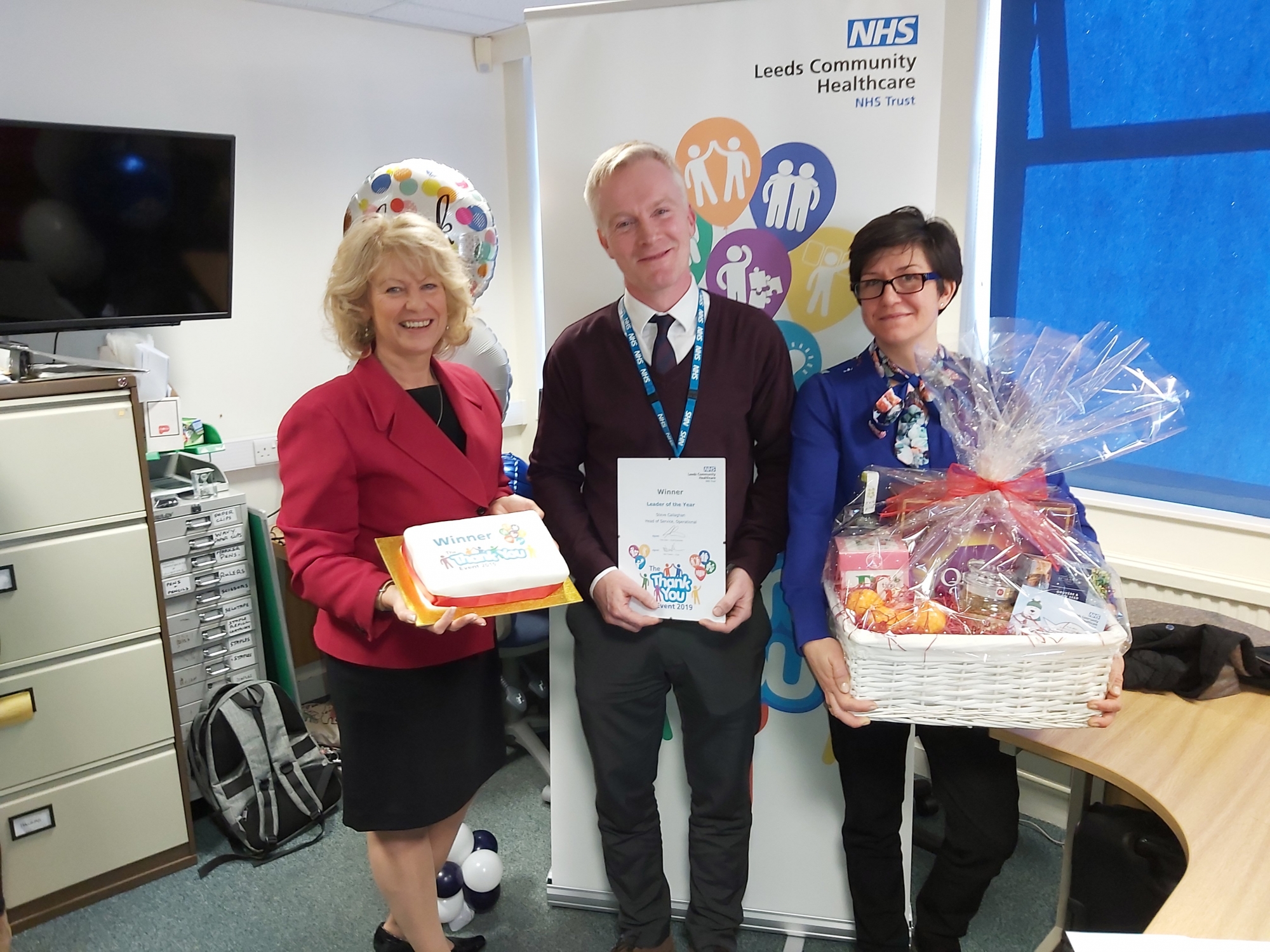 Steve Callaghan, Head of Service, Operations for the Leeds Mental Wellbeing Service, is described as a calm, supportive and optimistic colleague who commands the respect, trust and co-operation of colleagues and partners alike. Steve has led the Improving Access to Psychological Therapies team (a complex partnership of LCH staff and third sector organisations) through a huge transformation journey over the last 18 months, as the service moves to become the new Leeds Mental Wellbeing Service (LMWS).

Whilst supporting colleagues, Steve has introduced service developments to increase access and support for clients. These include; a triage screening hub, a hub manager role and the development of therapy groups and workshops. He has also sourced and put in place digital ways to deliver therapy to drive down waiting lists. Steve’s colleagues say of his approach: “He continuously keeps an eye on data and targets and what these mean for the service, but doesn’t let this detract from his ethos that every service user matters”.

Steve received glowing testimonials from a range of third sector partners and is heralded by his colleagues as an; “excellent communicator and planner, with a vision of the big picture”. Much of the city-wide work Steve has been involved with is in addition to his ‘day job’ of leading a service which receives 1500-1800 new referrals a month. Colleagues remark that Steve has demonstrated integrity and energy to lead staff through changes, balancing the demands of the current service with ensuring care for both staff and service users.

Speaking after his surprise ‘Thank You’ Award hamper, was presented by Sam Prince, Executive Director of Operations, and Ruth Burnett, Executive Medical Director, Steve said: "Honestly that is absolutely amazing I’m totally lost for words. Thank you everybody I really appreciate it. It’s been such a difficult year for all of us and I think what stands out for me is that as a team we have all worked really well together and what we have achieved is pretty incredible. This award is for all of us and, to be recognised like this, I can’t quite get over it!" 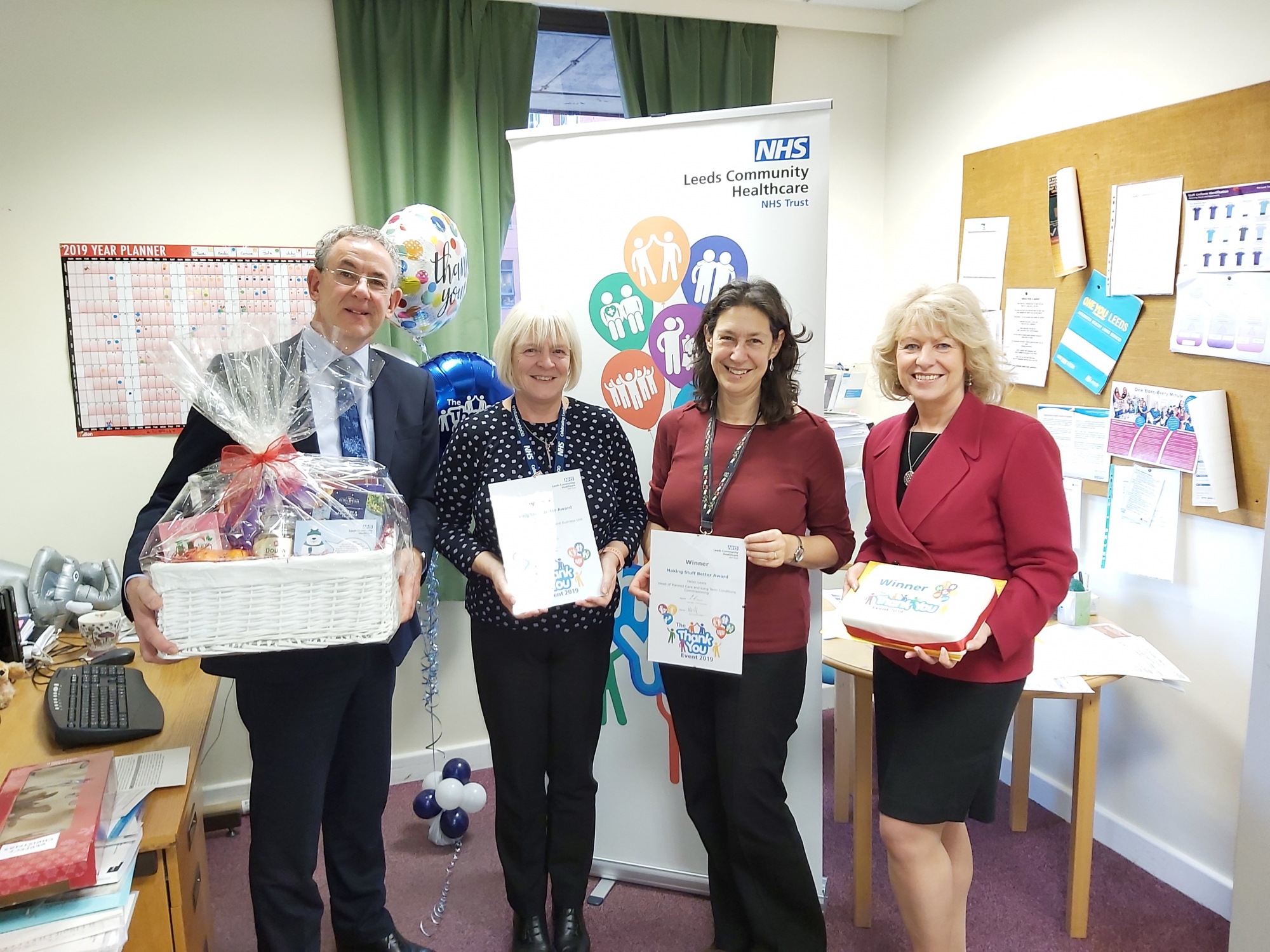 Andrea and Helen are having a massive impact on the transformation of healthcare for the people of Leeds and show how powerful partnership working can be.

According to Elaine Goodwin, the Clinical Lead for the Specialist Unit, their ambition to develop a service built around people has resulted in a move away from competitive healthcare provider behaviours seen in the past. Instead they have a ‘can do’ attitude that concentrates on solutions and have promoted this style of leadership within their teams. In turn this has led to patient centred and seamless approaches to care that are ‘making lots of stuff better’.

Examples include:
Redesigning the Stroke Pathway. Patients now get the right care in the right place to meet their rehabilitation needs and the average length of hospital stay has reduced from 32 to 16 days – well below the national average of 21 days).
Merging the LTHT and LCH Parkinson’s Disease Services into a consistent citywide service that offers equitable access, resulting in improved quality and safer care.
Facilitating a Diabetes Strategy which has enabled service users, practitioners and commissioners from acute, community and primary care settings to develop a single ’Diabetes Leeds’ service.

“Andrea and Helen have created a culture of trust across the system that supports staff to work together using innovative and creative approaches which have significantly improved patient pathways for people across Leeds,” said Elaine.

Andrea said: "We love working together and we can see that there's a difference happening in the city which is what's most important."

Colleague of the Year Award - Winner 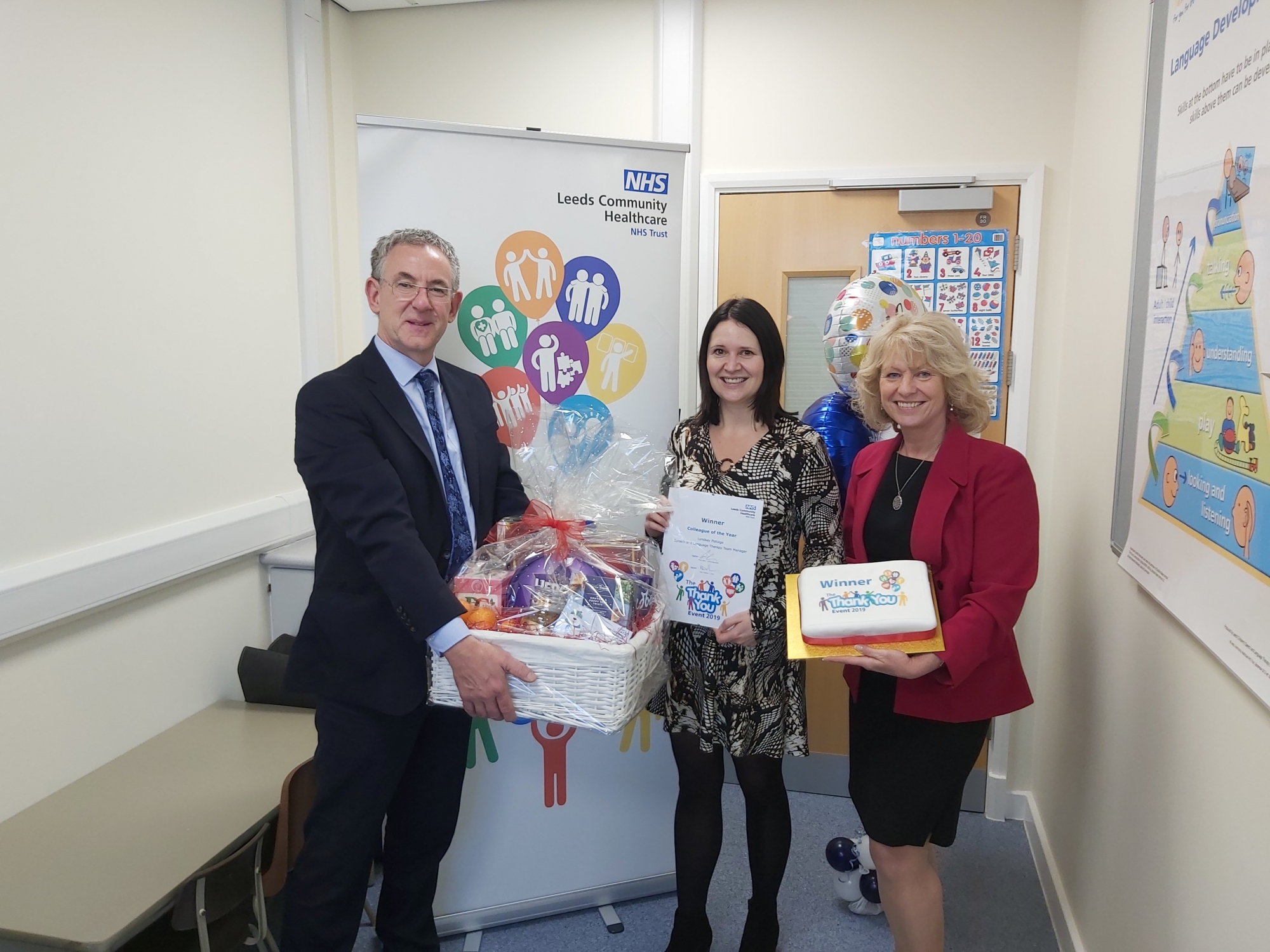 Lindsay Pottage, Speech and Language Therapy Team Manager, is described as consistently going above and beyond to show kindness and sensitivity to her colleagues. She is known for being the first person that many people in the Speech and Language Therapy service would contact in a crisis as she can be relied on to be kind, thoughtful and always listens without judgement. Despite having a heavy workload, she never hesitates to put time aside for a colleague in need and is always approachable to colleagues.
Lindsay received two nominations from her colleagues Fay Meakin and Annabel Davis, who think she is: “the definition of the colleague of the year.”

Fay said: “Lindsay is a wonderful listener. She has wonderful communications skills and is extremely empathetic. Lindsay is very good at picking up on what people need; be it a cup of tea, a chat, a hug, some quiet time or some more significant support.”

Annabel said: “I genuinely feel that my positive experience of LCH is largely down to her consistently making me feel welcome and supported and feel that she has really supported me in feeling more confident both professionally and personally..”

After receiving the award, Lindsay said "Thank you so much I feel like I’m in a dream. I feel very honoured and humbled to receive this award. Amazing to be recognised in this way for just coming to work and doing my job - I love working for LCH.”