You are here: Home > News > Nurse celebrates 50 years in the NHS

Nurse celebrates 50 years in the NHS 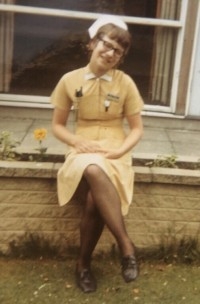 This month we’ve set aside the usual ‘Thanks a Bunch’ to honour a very special nurse because Maureen Marshall is celebrating her 50th year of nursing in the NHS.

Maureen joined the NHS as a Cadet Nurse at Seacroft Hospital in 1969 at the age of 15 and started Pupil Nurse Training when she was 18. She moved on to community care in the early 2000s, leading her to her current role triaging patients at Meanwood Integrated Team.

Maureen was nominated by Sally Postlewaite, Neighbourhood Team Officer for Meanwood/ Wetherby, who was keen to acknowledge her no-nonsense approach, common sense and years of experience. Sally said “She puts on that old school ‘don’t mess with me’, but she is as soft as they come…”

“I’m sure most staff will agree how supportive she is – both at work and personally. She is a friend for life - an absolute gem.”

Steph Lawrence, Executive Director of Nursing and Allied Health Professionals, was on hand to thank Maureen for her years of service. She said "You have been a community nurse for 50 years overall and a member of the Integrated Team here for the past 20 years. Your friends in this team and colleagues across the organisation wanted to say 'Thanks a Bunch' to you for your years of dedicated service. I am honoured to be marking this milestone with you today. 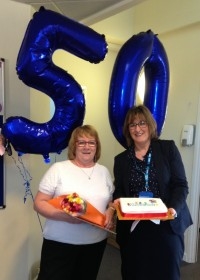 During her career, Maureen has also raised three sons and now plays an active part in looking after two granddaughters. She is also the office baker and is known to take orders for mince pies at Christmas!

Maureen advised new nurses: "Remember that the most important thing is good old fashioned patient care - and respect for people. If you have these things you'll be doing well."

When asked about her career, she added: "It passes in the blink of an eye. You wonder where the time goes. I wouldn't change it at all but I'm looking to spend more time with my two grandchildren."

Pictured above: Maureen as a Cadet Nurse in 1969, Steph Lawrence, Executive Director of Nursing and Allied Health Professions, presenting Maureen with her 'Thanks a Bunch' award.