The Royal College of Podiatry has awarded Leeds based podiatrist Nina Davies their most prestigious award for contributing to advancements in the podiatry profession, both nationally and internationally. 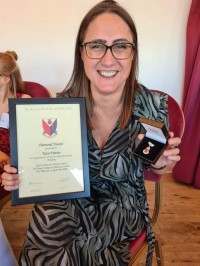 Nina Davies, Clinical Systems Pathway Development Lead at Leeds Community Healthcare NHS Trust was presented the Diamond Award at the House of Lords on 24 September. The award is the highest award within the Royal College of Podiatry and is presented to individuals who have demonstrated a substantial, outstanding and exemplary contribution to the profession of podiatry over a sustained period of time. At any one time there must not be more than 25 living recipients of the award.

Some of Nina’s contributions to the field include being actively involved in National Institute for Health Research (NIHR) funded research, equipping the next generation of podiatrists as a visiting lecturer at Staffordshire University as well as leading on shared publications including the Royal College of Podiatry’s Children’s Podiatry Clinical Framework to raise awareness and consistency in the podiatry field. Nina has also co-produced the first undergraduate and masters modules in children’s podiatry with the University of Plymouth and Staffordshire University.

Nina was nominated for the award by a group of international podiatrists, including Dr Jill Halstead PhD, Clinical Head of Service for Dental and Podiatry at Leeds Community Healthcare NHS Trust. Jill said “I feel inspired by Nina and her passion for podiatry and children’s health – she is a worthy recipient of the Diamond Award. We are delighted that the Royal College of Podiatry has recognised her 20 years of NHS practice and her outstanding commitment to the advancement of children’s podiatry.”

After receiving the award, Nina said “I feel so honoured to be recognised in this way. I’m immensely proud to be part of such a hard-working dedicated group of people who have raised the profile of podiatry and improved care for so many people.”