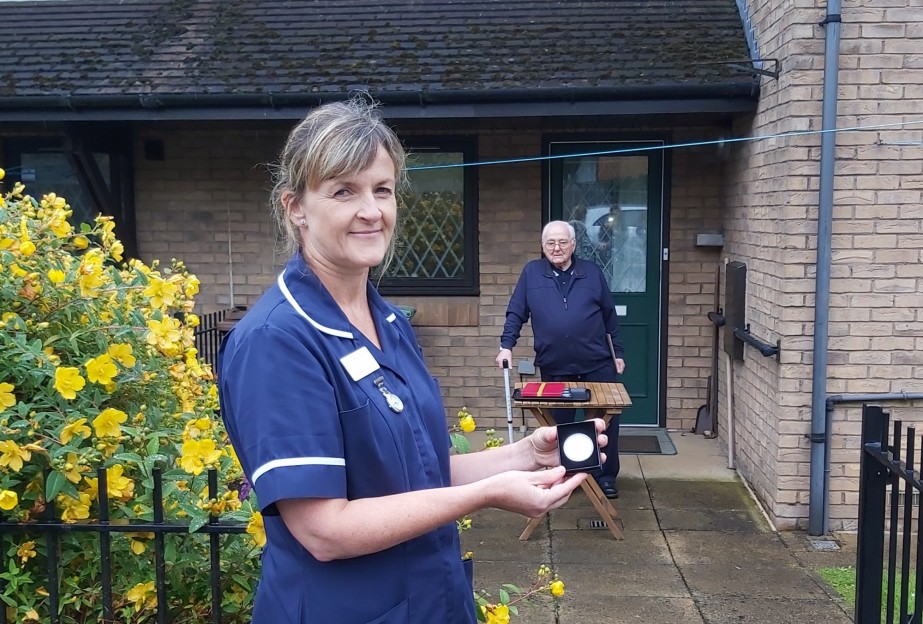 A former ambulance serviceman thanks community nurses from Leeds Community Healthcare NHS Trust by presenting them with hero medals.

Mr William Wheatley, 87, from Meanwood in Leeds has had 12 solid silver medals made for each nurse who he affectionately calls “my lasses”, who nurse him at home to honour them for their dedication to nursing, particularly during COVID-19. Each medal says ‘Hero 2020’ and a personalised card explains why it’s being given.

He saw a campaign to get the entire NHS awarded with the George Cross and has written to high profile supporter, Lord Ashcroft, to see if he can get the team specifically named as part of the campaign. He has also had the hero medals made by the same company that makes the George Cross.

Mr Wheatley said: “The nurses at Meanwood Neighbourhood Team are heroes, particularly for how they have worked during the pandemic, to make sure people like me get the care they need. I have known the team for six years as they nursed my wife before she passed away and they’ve nursed me ever since.

“I believe the NHS should get the George Cross for its work during COVID but I wanted to show my own appreciation for my team.”

Therese Dales, Associate Community Matron, and Michelle Eaglen, Neighbourhood Clinical Quality Lead from the team arrived at Mr Wheatley’s house at 10am on Thursday 2 July to receive the medals from him on behalf of the team.

Therese said: “This is absolutely fantastic and comes just as the NHS is celebrating its 72nd birthday. We are thrilled and touched that Mr Wheatley thinks so highly of us and the nursing service we provide and we’re very grateful for lovely medals.”