The NHS is now offering vaccinations to people who are most at risk from Covid-19. Read more information about the COVID-19 vaccine on Leeds CCG.

You are here: Home > News > Double 'Thanks a Bunch' award for August and September

Double 'Thanks a Bunch' award for August and September 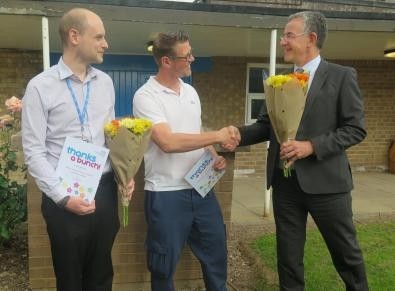 The thanks went to Neighbourhood Team Officer, David Redshaw and Physiotherapist, Simon Brown for supporting a senior citizen to play her PlayStation after an 8 year hiatus!

Bryan Machin, Executive Director of Finance and Resources, surprised both of them with flowers and a certificate, in recognition of demonstrating our Trust behaviours of Finding solutions, Caring for our patients and Working together.

A few months ago, Simon visited a patient and noticed she had a number of computer games; in fact, she had a whole shelf of them and a PlayStation 2.

She said she’d really enjoyed playing them in the past and would love to play them again. Together they calculated that it had been 8 years since she had played them!

Simon sought advice from David (as he is also a gamer) who offered to have a look when Simon next visited. After resolving the technical issues and repositioning the equipment to reduce risk of falls, David made her some easy read instructions.

Bryan said: “What really resonated with me was the huge difference to her quality of life this will make. We wanted to thank you for going above and beyond.”

Simon said: “This personal perspective is how we approach time with all our patients. We often come across things that we try and sort out, some small things and some big things. This was a fairly minor thing that had a large impact. It’s the holistic approach.”

Both were nominated by Olive Keating, Neighbourhood Clinical Quality Lead/ Physiotherapy Lead (Holt Park Integrated Team). In her nomination Olive said: “It was a lovely example of someone taking the time to share their knowledge to improve another person’s life.”